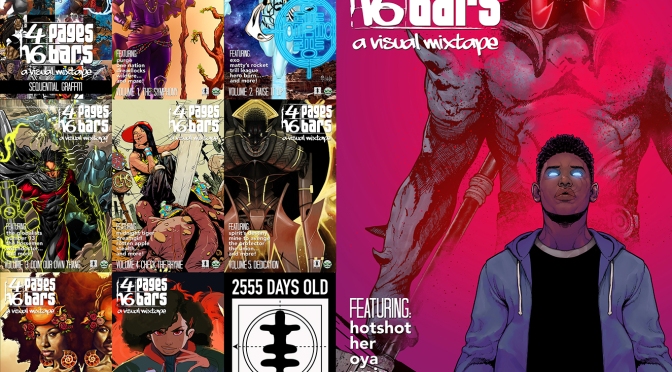 Welcome to the eighth volume of 4 Pages 16 Bars: A Visual Mixtape! Thank you to all of the Visual MCs, Literary DJs and Crowd Controllers who saw the vision and decided to enter the Cipher. Y’all have shown where the true diversity in this comic book industry exists and came through with straight bangers!

And to think, all of this started with a casual conversation…

In 2007, I was at the WizardWorld Chicago Comic Con. I happened to run into Sanford Greene (Bitter Root, Power Man & Iron Fist). Both of us were taking a much-needed break from manning our respective booths. At the time, we were both working on Hip Hop-related projects with Sanford creating the artwork for the Method Man graphic novel while I was writing a book called (at the time) Hip Hop Chronicles.

Since we were both in a “break dancing & wall tagging” state of mind, we started reminiscing on the direction our respective careers were taking. We talked about the sketchbook and how that reminded each other of the mixtapes DJs and rappers would create to sell their skills directly to the masses.

Taking the sketchbook/mixtape metaphor further, the Comic Con became, in essence, the equivalent of selling a mixtape at a swap meet or out of the trunk of your car. The sketchbook reflected the stage of the creator’s career.

When you start out, you probably don’t have a lot of money. But you could go to Kinkos and, using the copy machine, print up about 20 – 50 of those sketchbooks right quick to give the audience a taste of your skills.

The full-color experience let you know that the artist was ballin’ and making power moves… They done come up!

In any event, the whole idea is that as one levels up in their career, their presentation evolves as well. One develops their professional persona and define their swag. The sketchbook then becomes the avatar of one’s “drip, “so to speak. The sketchbook, in our summation, is a visual mixtape.

You picking up what was just laid down?

I’m a child of the 70s who came of age in the 80s. The mixtape, in my time, was a carefully curated work. One didn’t just slap a bunch of songs together on a cassette and send it on its merry way. Nah. You had to come up with a theme. Your mixtape had to have a narrative, and a raison d’etre or reason for being.

Maybe you were nursing a heartbreak. Maybe you were trying to shoot your shot with that special someone. Maybe you wanted to get the party started with the perfect selection of tracks guaranteed to get the crowd amped up. The mixtape was a form of personal sonic expression where one could become the DJ, the Bard, or the Griot they felt they were meant to be.

Track selection was an extremely important aspect of making a bomb mixtape. Again, one could be basic about it; just take the hits everyone heard on the radio, slap them together and off they go. But anyone could turn on the radio and listen to the hits. You might as well buy a volume of Now, That’s What I Call Music and call it a day. To make a dope mixtape, one had to go off the beaten path and “dig in the crates” a little bit.

Track arrangement was the secret sauce of the mixtape. It’s one thing to have the dope music. It’s another thing to arrange those tracks and assemble a tale that hits the emotions of the listener. A great mixtape was the soundtrack to a film that people wished they could see. A mixtape was all about mood and intention with the goal to take its intended listener on a journey into the creator’s psyche.

This philosophy is the methodology behind 4 Pages 16 Bars: A Visual Mixtape. Each volume has been carefully curated with each entry chosen and arranged to take the reader on a journey through the diversity of creators, and content, that is present in the comic book industry. We go deep; finding the best cuts and the illest tracks to craft an eclectic experience that can only be found in the indie comic world.

And now here we are; eight volumes in serving up the crème de la crème of Black Comix, in particular, and Indie Comics in general. This village has definitely become a nation.

So, sit back and relax, kick your feet up, get into this playlist we put together for you, and remember…