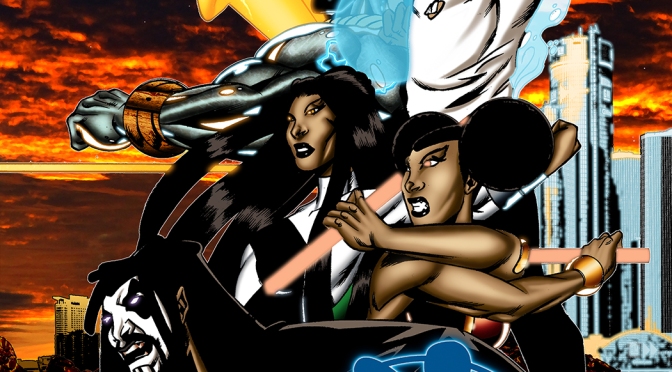 Griot Enterprises is celebrating 20 years of publication with the 20th anniversary release of The Horsemen: Divine Intervention.

Created, written and illustrated by Jiba Molei Anderson, The Horsemen is the saga of seven ordinary people thrust into extraordinary circumstances, as the gods of ancient Africa possess them. The gods have chosen them to protect humanity from itself…whether humanity wants them to or not. They combat those who control the fate of the planet. Through their actions, the world would never be the same.

With the release of the first issue in 2002, The Horsemen became a pioneer of the Afrofuturism movement in comics by using the Orishas as the basis for the superhero mythology. “I wanted to work with a different faith system, a system that when The Horsemen was created, no one, I mean no one, was thinking of,” Anderson says. “No one was thinking of using the Yoruba religion and its deities, the Orishas as a launch point for a comic book world at that time.”

The Horsemen would go on to become a critical, if not financial, success. Its fan base would include Hollywood talents such as Tony Todd (Candyman, Star Trek DS9 and Sean Astin (Lord of the Rings, Stranger Things) and comic book royalty like the late Dwayne McDuffie (Justice League Unlimited, Milestone Media). In addition, The Horsemen and Griot Enterprises served as the link between the independent Black Comix scene of the 90s (Brotherman, Tribe) and 21st Century renaissance currently happening in the industry with books like Niobe: She Is Life, Is’nana: The Were-Spider, Black and the entire Catalyst Prime imprint.

The Horsemen: Divine Intervention is available at Amazon, Comixology, Drive Thru Comics, IndyPlanet and Peep Game Comix in print and digital formats. In addition, Griot Enterprises is running a GoFundMe campaign to help fund the company’s 2018 convention schedule.