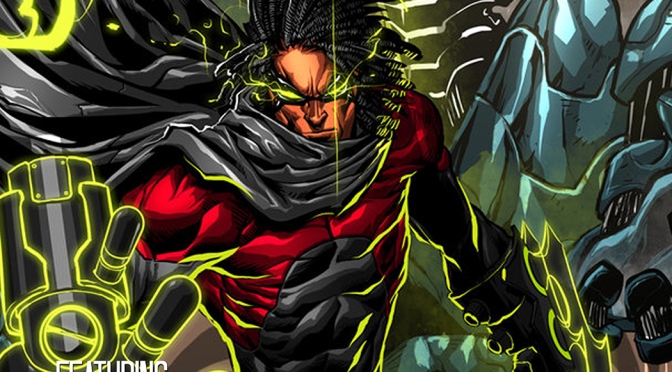 We have been here from the beginning and every day, there is another person of color, with nothing more than a pencil and imaginations, creating sepia-toned superheroes to right wrongs and provide inspiration to future comic book fans.

This is a celebration of the African American contribution to a uniquely American art movement, one, that at over 100 years and counting, has lasted longer than any modern artistic movement in history.

Here now are some of the trailblazers who paved the way for all of us from Milestone to Ania to Gettosake to Griot Enterprises, Black, Tuskegee Heirs, Niobe and so many more of us making comics today.

George Herriman’s premise of the series goes a little something like this: Krazy Kat is in love with Ignatz Mouse. Ignatz Mouse rebuffs Krazy Kat’s affections by throwing bricks at Krazy’s head. Krazy takes the brick throwing as a sign of affection from Ignatz Mouse and continues the pursuit. In this abusive situation comes Offissa Pupp, who is love with Krazy Kat, locks Ignatz Mouse up in order to show his feelings for the Kat who is totally oblivious to the good Offissa’s intentions.

Krazy Kat is, unmistakably, a Black comic strip. Through Herriman’s cultural chameleon-like way approaching life and work, he was able to bring his African American viewpoint on life and love to the masses…and the masses ate it up.

Created by Jackie Ormes, Torchy Brown in Dixie to Harlem, starring Torchy Brown, was a humorous depiction of a Mississippi teen who found fame and fortune singing and dancing in the Cotton Club. Ormes became the first African-American woman to produce a syndicated comic strip.

Torchy presented an image of a black woman who, in contrast to the contemporary stereotypical media portrayals, was confident, intelligent, and brave.

Clarence Matthew Baker is the first known African-American artist to find success in the comic-book industry. He entered comics through the Jerry Iger Studio, one of the 1930s to 1940s “packagers” that provided outsourced comics to publishers entering the new medium. Baker’s first confirmed comics work is penciling and inking the women in the 12-page Sheena, Queen of the Jungle #69.

Baker was inducted into the Will Eisner Comic Book Hall of Fame in 2009.

Published in 1964, created by Steve Perrin and Ronn Foss for Mask and Cape #4, The Black Phantom pre-dates Jack Kirby’s Black Panther appearance in the Fantastic Four by two years. This fact makes the Black Phantom the first Black costumed superhero.

The Black Phantom was Lafayette Jefferson, an engineer and soldier who worked with the N.A.A.C.P. to address racial injustice in the southern United States. While traveling, he meets a young white man and orphan named Joey Trager. Together, they become the Black Phantom and the Wraith to battle the likes of the Ku Klux Klan and other opponents of tolerance and change.

Inspired by the television series I Spy, the first TV dramatic show to co-star an African-American in a lead role, writer John Saunders and artist Al McWilliams created the adventure comic strip Dateline: Danger! for the Publishers-Hall Syndicate. Introduced as both a daily and a color Sunday strip in November 1968, it similarly was the first in this medium with an African-American lead character, Danny Raven. As in the TV show, the two protagonists were American secret agents who globe-trotted to trouble spots under the cover of another profession.

Friday Foster was an American newspaper comic strip, created and written by Jim Lawrence and later continued by Jorge Longarón. It ran from 1970 to 1974 and was notable for featuring the first African American woman as the titular character in a comic strip.

Early on, Lawrence’s story lines had a harder edge showing the contrast of Friday’s family with her street-wise brother trying to accept her newfound success in the world of magazine publishing. But soon its episodes changed focus to showcase more soap-opera thrills of romance and travel for the gorgeous African-American.

Friday Foster made her way to film in 1975 with the incomparable Pam Grier playing the action-seeking photographer.  Friday Foster is arguably, the first African American comic strip character as a lead brought to the cinema.

Powerman was a British comic book series written by Don Avenall (aka Donne Avenell) and Norman Worker, and illustrated by Dave Gibbons and Brian Bolland that was initially distributed in Nigeria in the early 1970s. The series starred a superhero named Powerman. When the comics were re-published in the United Kingdom the character’s name
became Powerbolt.

An executive from a Nigerian advertising agency approached Bardon Press Features to discuss the idea of making a series with a black superhero; the man and his wife saw that in Nigeria, the comics available were imported and had White protagonists. Gibbons said that he remembered asking why Africans did not work on the strips and hearing that the African artists would likely emerge once comics become popular in Africa.

This is where we came from. Now, check out where we’re going. Grab Volume 3 of 4 Pages 16 Bars: A Visual Mixtape – Doin’ Our Own Thang available now on Amazon, Kindle and DriveThruComics. Support diversity in Indie Comics!